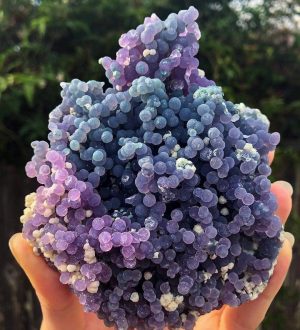 Pictured above – Grape Agate or Purple Chalcedony from Indonesia.  Photo: Amarisland
Metaphysical PropertiesGrape Agate is excellent for various metaphysical purposes. Grape Agate promotes inner stability, composure, and maturity. Its protective properties encourage security and self-confidence. It allows for deep and intense levels of meditation in a short period of time.

Grape Agate is a crystal of dreams, intuition, and luxury. It is a healing crystal of the crown chakra, a powerful fire element used in the south area of a home

Purple Chalcedony is a pure stone of the Violet Ray. This makes it a powerful influence for purification and cleansing of the auric field, and as a provider of psychic protection

Purple Chalcedony acts as a psychic stimulator and protector, as well as a caller of visions and dreams. Both Purple and Blue Chalcedony activate the third eye chakras.

Due to its soothing and protective qualities, it is excellent for those who feel they are too sensitive to energy.  Purple Chalcedony can help children feel safe with their psychic and intuitive abilities. It helps them learn to regulate their receptivity and feel more protected on an energetic level.

Grape Agate gemstone is a relatively new find. Although the trade name is Grape Agate, these are actually Botryoidal Purple Chalcedony. Botryoidal means that round tiny sphere shaped crystals that have naturally formed together. Grape agate is a tranquil and gentle stone.

Chalcedony has a waxy luster, and may be semitransparent or translucent. It can assume a wide range of colors, but those most commonly seen are white to gray, grayish-blue or a shade of brown ranging from pale to nearly black.

Chalcedony is quite varied in its formation habits. It sometimes occurs in geodes, lining the cavity with mammilary blobs. Its Agate variety is also found in geodes, commonly lining the outer layer underneath the larger Quartz crystals. Chalcedony also forms pseudomorphs after organic material.

A well-known example is petrified wood, in which the wood has been completely transformed into Chalcedony. In the Petrified Forest National Monument in Arizona, an entire forest was transformed into petrified wood. Remains of this ancient forest can be seen in the huge silicafied logs that are found in the area.

For most of time, chalcedony was thought to be a ‘fibrous’ variety of cryptocrystalline quartz, but more recently, it was actually discovered to be a combination of quartz and another silicate mineral; moganite (a polymorph of quartz). Both quartz and moganite share the same silicon dioxide chemical composition, but they have varying crystal structures. Moganite is monoclinic, while traditional quartz belongs to the trigonal crystal system. Chalcedony forms with a hexagonal crystal structure. The fraction, by mass, of moganite within a typical chalcedony sample may vary from less than 5% to over 20%.

As the defining mineral for 7 on the Mohs scale, chalcedony quartz is known to set the standard when it comes to gemstone hardness for jewelry gemstones. The actual name ‘chalcedony’ originated from the latin word ‘Chalcedonius’, which is thought to be derived from ‘Chalcedon’, an ancient seaport of Asia Minor, now Kadikoy, Turkey.

Chalcedony is compact silica most often found in sedimentary and volcanic environments. Formation occurs over a long period of time, as minerals are slowly deposited into a pocket of another type of rock, such as granite. Areas that host volcanic activity frequently harbor the most abundant chalcedonic deposits. In many cases, silicon dioxide forms in sometimes readily visible and parallel bands, as seen in banded agate. However, with most materials, the separate deposits appear blended or cloudy to the eye, as with carnelian, moss agate and ‘actual chalcedony’.

See also:
The Major Varieties of Chalcedony (Photos)
Types of Agate With Photos

Birthstones and How they Originated